This year we shall commemorate the 200th anniversary of the birth of the legendary explorer Dr David Livingstone and it was with this in mind that Judith and I were invited to visit Zambia and Namibia recently.

We carried with us a beautiful leather-bound photographically reproduced copy of Livingstone’s best selling “Missionary Travels” published in 1857.  This fine volume had been published by Time-Life books and covers his journeys and expeditions up to March 1856. 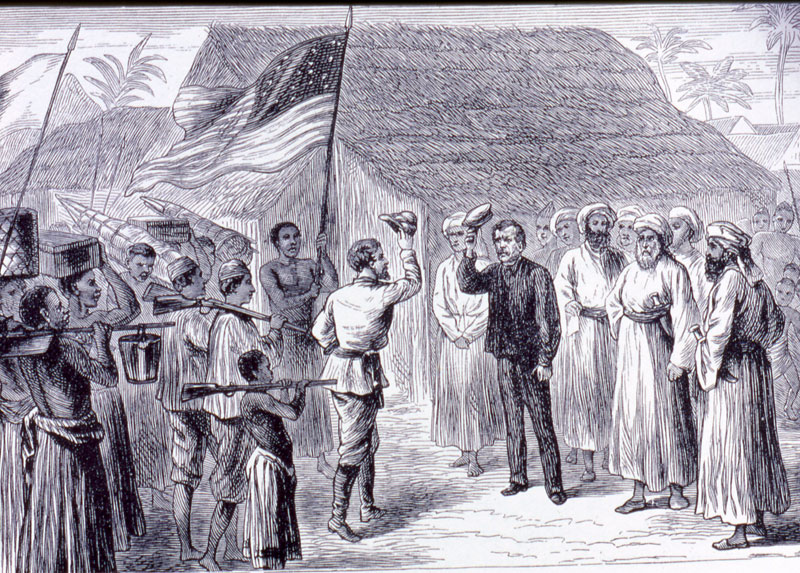 David Livingstone, a truly self made man was born at Blantyre near Glasgow and leaving school aged 10, spent 14 years working in a cotton mill.   Strict upbringing in the Church of Scotland led him to become a missionary.  However whilst working long hours at the mill he learned Latin  and Greek from a book mounted in front of his spinning machine.  Later he went on to study theology and medicine becoming a qualified doctor and ordained as a member of the London Missionary Society.

His original intention of working in China was cancelled due to the Opium War so he turned his attention to Southern Africa.  Livingstone’s book describes his early work in the land much of which was still to be explored.  Within months of arriving in Cape Town, he was pressing into unknown territory and during the next 10 years  was constantly on the move nearly dying of thirst, hunger and fever.  However, as a missionary he must be judged a failure, winning only one convert who later lapsed, but as an explorer he was already gaining fame; being awarded a gold medal by the Royal Geographical Society for his part in the discovery of Lake Ngami.  Throughout these years, Livingstone had to contend with predatory Boers and hostile natives.  But perhaps the severest trial came in 1844 when he was mauled so severely by a lion that he almost lost the use of his left arm.

Livingstone ascribed the failure of his evangelizing efforts to the poverty of the Africans and their harassment by Boers and slavers.  Believing that the natives would not embrace Christianity until they had “a certain measure of bodily comfort and security”, he decided to find a route to the Atlantic coast that would encourage legitimate commerce to undercut the slave trade.  On November 11, 1853, he set out on his great adventure, accompanied by a party of Makololo tribesmen and equipped with barter goods, half a dozen firearms and a magic lantern “to convey the elementary truths of the Bible”.  Eventually he reached the Atlantic but finding the route unsuitable marched back eastward to the Indian Ocean.  His journey ended in March 1856 and returning to Britain within months he published the account of his exploits, “Missionary Travels”.Our visit to Southern Africa was organised by our friend Charlie Morison of Campbell-Bell Communications, the Mantis Group and KLM.  Landing at Lusaka we met Tim Featherby, the owner of Baines River Camp, who flew us in his Pilatus aircraft to see Chief Chitambo IV and visit the Memorial where Dr Livingstone died on 1st May 1873.  The Chief’s ancestor Chitambo the First had given the dying doctor shelter for the last few days of his life.  Standing in the shady grove where the great man died, one began to appreciate the long and arduous treks he had made through the bush and swamps of the “dark continent”.  Indeed he is believed to have covered 30,000 miles on foot, donkey and occasionally on his oxen, Sinbad.  Towards the end he was so ill that his faithful servants had to carry him as he sought the source of the Nile. The area around the Memorial is the Kasanka National Park, one of Zambia’s smallest, but a gem of wildlife and calling there we felt Livingstone, who foresaw the demise of the animals, would have  thoroughly approved  the work of the Kasanka Trust.  Bird watching opportunities abound and it is here one may see the beautiful swamp-dwelling sitatunga antelope

Next we flew on to the Baines River Camp, a place first explored by David Livingstone and the artist Thomas Baines.  Flying in as night was falling, we landed on a tarmac surfaced mile long  airstrip on the Northern bank of the wide Zambezi river.  To greet us, three beautiful Lionesses lay beside the strip, doubtlessly awaiting an Impala for supper!  However Tim and his wife Sabine had organised a glass of champers to steady our nerves when we disembarked.  Accommodated in extremely comfortable chalets we found luxury where it was least expected and enjoyed the friendly hospitality and delicious meals whilst having superb viewings of the wildlife and a memorable meeting with a huge bull elephant.. 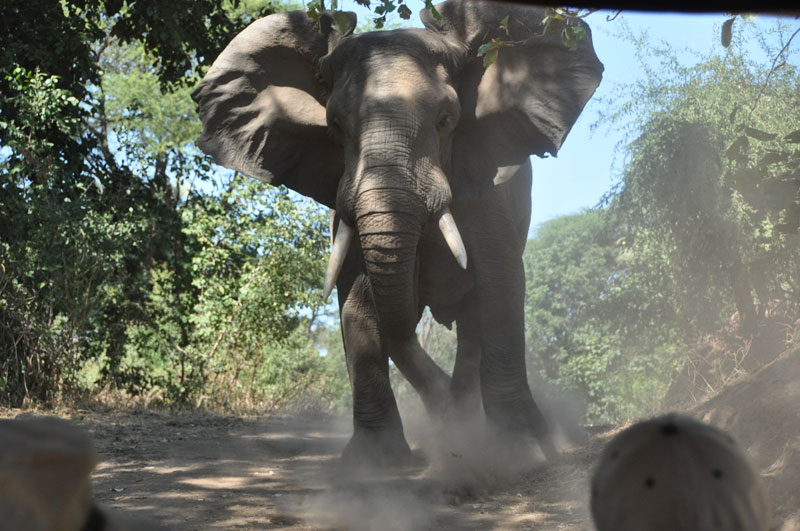 Charging at us in a cloud of dust the giant only stopped 5 yards short of our open vehicle (probably due to one of my wife’s stern stares!) before turning his attention to an adjacent termite mound on which he vented his anger before coming at us again from behind.  It was then that I noticed a discharge of liquid on the bull’s head.  He was in musth, a condition when male elephants testosterone level rises dramatically and they become unpredictable and very dangerous.  Thanks to the skill of Leonard, our Zambian driver, we sped away and I was reminded of Livingstone’s vivid descriptions of his close encounters with these huge beasts.

It was easy to see how the explorer had believed that this vast waterway could have been a navigable entry to Africa.  Alas he had not  met the Kebrabasa rapids then which eventually blocked it.   By the time Livingstone reached this area he had discovered the mighty Victoria Falls and travelled several thousand miles to and from Loanda in what is now Angola, but was then a centre for the odious slave trade.  On this journey alone he endured over 30 attacks of Malaria.  Later we were to spend time aboard the 140 feet floating boutique hotel “Zambezi Queen” and see the expansive Chobe River down which Livingstone had canoed.  The Managers, Wayne and Vicky, arranged a busy but most enjoyable programme, much of it on smaller craft along the waterways viewing the spectacular array of game,  the  countless colourful birds and a wide variety of plant life.  Having unobstructed views of the river bank we enjoyed cool drinks and watched the glowing orange sun sinking past herds of browsing elephant.  Surely Livingstone, whose treatment for malaria was a couple of grains of quinine and a glass of sherry, would have appreciated this!  We fell asleep to the calls of the night birds and the grunts of happy hippos feeding in the vast reed beds.

After negotiating immigration in Namibia and Botswana, we re-entered Zambia to visit  Tina Aponte’s famous Royal Chundu Zambezi River Lodge and stayed in one of its magnificent suites on Katombora Island, from where we walked amongst massive Baobab trees, a thousand years old and paddled in inflatable canoes along Livingstone’s route towards the spectacular Victoria Falls.  The “smoke that thunders“ had made a great impression on the explorer and so it did on us and we paused at Livingstone’s statue to raise a glass of Mumms champagne in memory of this remarkable man.

There was also time to visit the Just a Drop water project at Mukini School and see how the children operated  the system with a circular play pump that propelled clean water up a 40 feet water tower.  We also visited the Livingstone Museum where a large number of artefacts and memorabilia of the eminent doctor are housed.

From our studies we knew that Livingstone returned to Africa in 1858 and embarked on a second long expedition, this time accompanied by a group of missionaries.  He was essentially a solitary man, and this enterprise was marred by bitterness between the white members of the party, a number of whom died, as did Livingstone’s wife Mary.  In 1865, he began his final journey, seeking the source of the Nile.  Travelling alone, except for his beloved Africans, it was on this expedition that he had his historic encounter with Stanley, sent out by the New York Herald, to search for the great man and bring him supplies that probably saved his life – plus some champagne which they drank from silver goblets!  The extraordinary friendship that blossomed between these two men, both of humble birth, later led Stanley to complete the doctor’s  quest for the source of the Nile and also to carry on the fight to eradicate slavery.  Eighteen months after they parted, Livingstone was found dead, kneeling as if in prayer at Chitambo.  Finally his body, riddled with disease, had given up.  How he survived so long is itself miraculous.   Incredibly Chuma and Susi, his loyal servants, made a nine-month, thousand mile, journey to bring his embalmed body back to the coast from where it was carried to England.  On April 18, 1874, in one of the greatest funerals of the 19th century, Africa’s most distinguished explorer was laid to rest in Westminster Abbey.

As the editors of the Time Life edition record, “What set Livingstone apart form other African explorers was not just the scale of his achievements, but the sympathy and understanding – paternalistic but sincere – which he conveyed for the Africans, whose languages he assiduously learnt and whose customs he meticulously noted.  And yet he was a true explorer – motivated by the desire to tread where no white man had gone.”  I think he would have been proud to know that of all his efforts one of the most valuable was his contribution to ending the scourge of the slave trade. 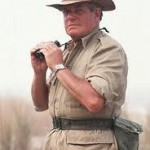 On the evening of Thursday 28 March 2013, John Blashford-Snell will be giving an illustrated lecture at the Royal Geographical Society in London  on the Legend of Livingstone to commemorate the 200th anniversary of his birth.  The aim is to raise funds to support the community work by the Scientific Exploration Society and refurbish the Livingstone Memorial in Zambia.  At £20 per person, tickets are remarkable value as they also include a pre-lecture reception with drinks and canapés.  The reception begins at 6pm and the lecture at 7pm . 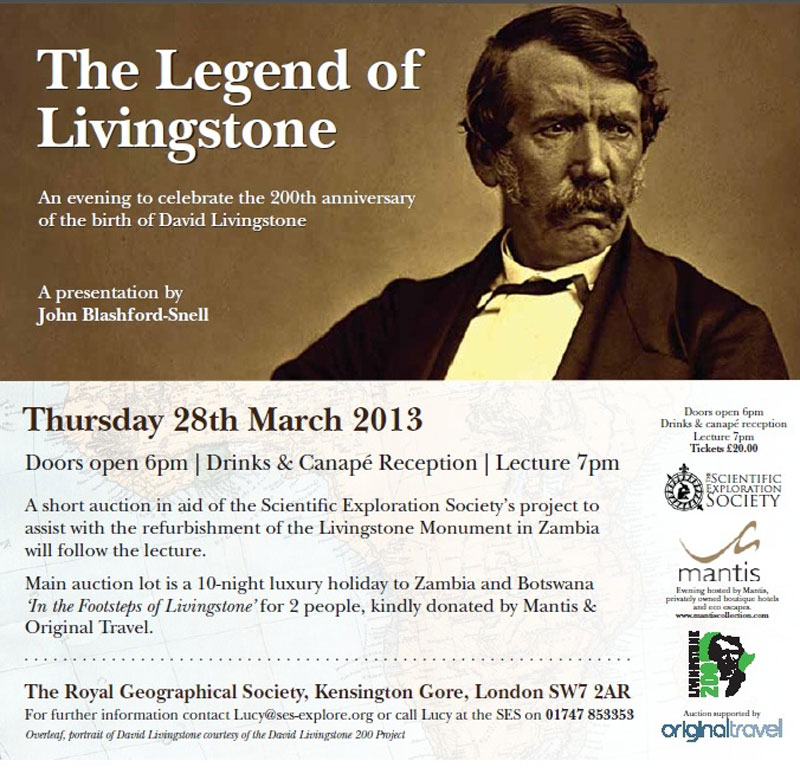