Bruce Dunlop is a GP in Chichester, and an intrepid traveller and sailor. This is the first in a series of articles for The Vintage Magazine about his peregrinations:-

In the West it is 2013, in Ethiopia, its Gregorian calendar says it is 2005 and time is not the only gulf that separates our cultures.

Lalibela is Ethiopia’s premier tourist destination and world heritage site. The ‘8th wonder of the world’ and a magnet to the faithful from  Ethiopia and the footloose from the world.

The town itself sits about 8000 feet up in the northern Ethiopian highlands with its 14,000 inhabitants alternately drenched by the summer rains and parched to dust by the winter drought.  Renamed from Roha in the 13th century by its farsighted  ruler Gebre Mesquel Lalibela who ruled from the end of the 12th to the beginning of the 13th century.   Gebre Mesquel was, as legend has it, chosen from infancy by divine forces.  His name means “ the bees recognize his sovereignty”, bestowed because when in his cot a swarm of bees settled on him.  He escaped unharmed but with greatly enhanced dynastic prospects.

The majority of Ethiopians are followers of the Ethiopian Orthodox Church, after the Assyrian Church probably the oldest in the world.  In the 12th century the better heeled and the more devout were accustomed to travel on pilgrimage to Jerusalem, a risky process for both person and pocket.  In 1187 Saladin conquered Jerusalem and the risks to tourism were magnified. The perspicacious Lalibela, seeking to spare his subjects the perils of the journey and to retain their revenues at home ordained that a New Jerusalem would be built at the heart of the empire.

With huge energy and religious zeal 12 churches were constructed, according to one chronicler in 11 years.  They were carved out of the soft pink rock in their entirety.  Pillars, walls, ceilings, alters, fretwork, the lot, one sold edifice.  They simply took the mountain and removed all the bits that were not church.  The results are an impressive testimony to the devotion of mankind to God.  They are also testimony to the quality of the original workmanship as after seven centuries of use and not much of a repair budget they still stand and carry out a real role in the deep religious life of the country.

Attendance at a church service in Lalibela or indeed anywhere in Ethiopia, requires a certain amount of stamina.  Here they start at five in the morning on a Sunday, at least that is when the tannoy system starts to broadcast the service.  The priests start at midnight.  The congregations settle down both inside and outside the churches, the sheer pack of humanity keeping every one upright and listening to a service recited in Ge’ez.  This ancient language is no longer spoken or understood by the ordinary man and preserved exclusively for ecclesiastical texts.

The 12 churches are worth a visit but perhaps not all in one dose.  If you want a tourist experience for the exclusively minded this is certainly a place on the top ten list in low season.  From May to August you are on your own.  The statistics were impressive, 12 churches and probably no more than 25 tourists in the entire city.  They are in 4 groups and Bet Giyorgis (St Georges) is without doubt the most famous and most photographed. 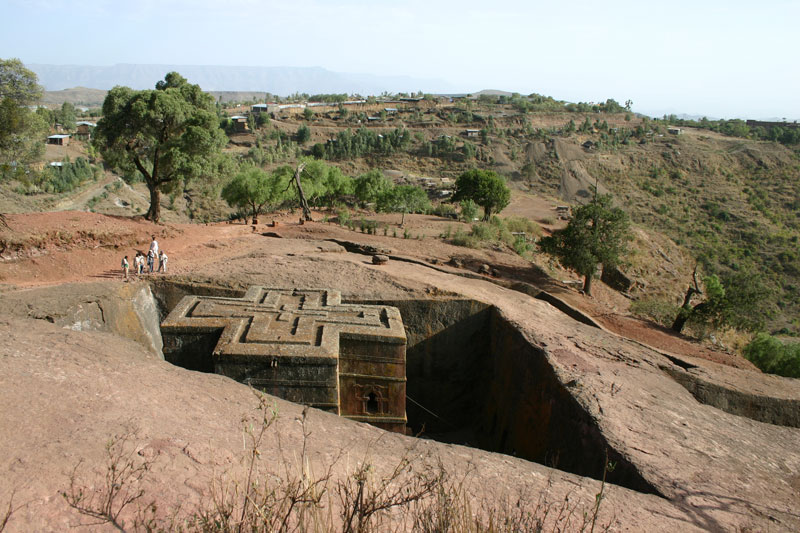 It is not the largest, that crown is held by Bet Medhane Alem (Savoir of the world) which is the largest example of rock hewn architecture in the world. 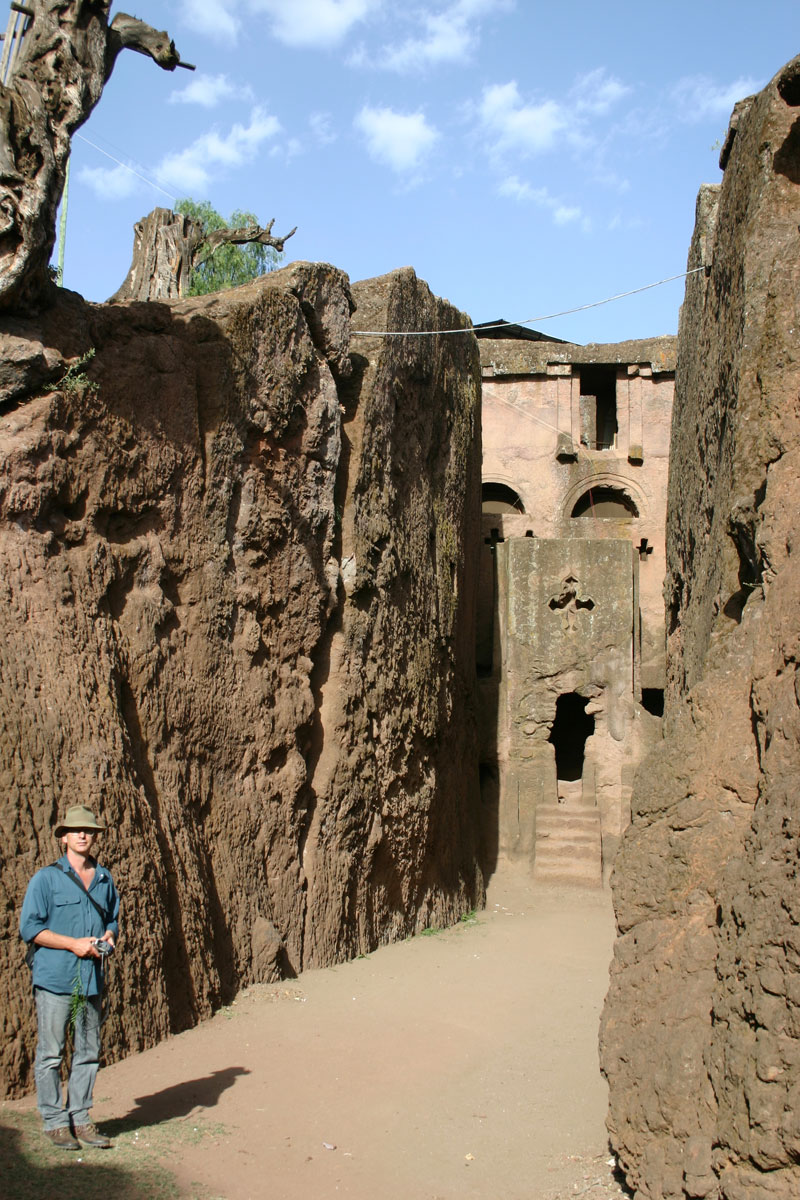 The Author outside a rock hewn church

You tour these sights alone, except for your compulsory, government approved, guide and a self appointed man to hold on to your shoes when you go inside. 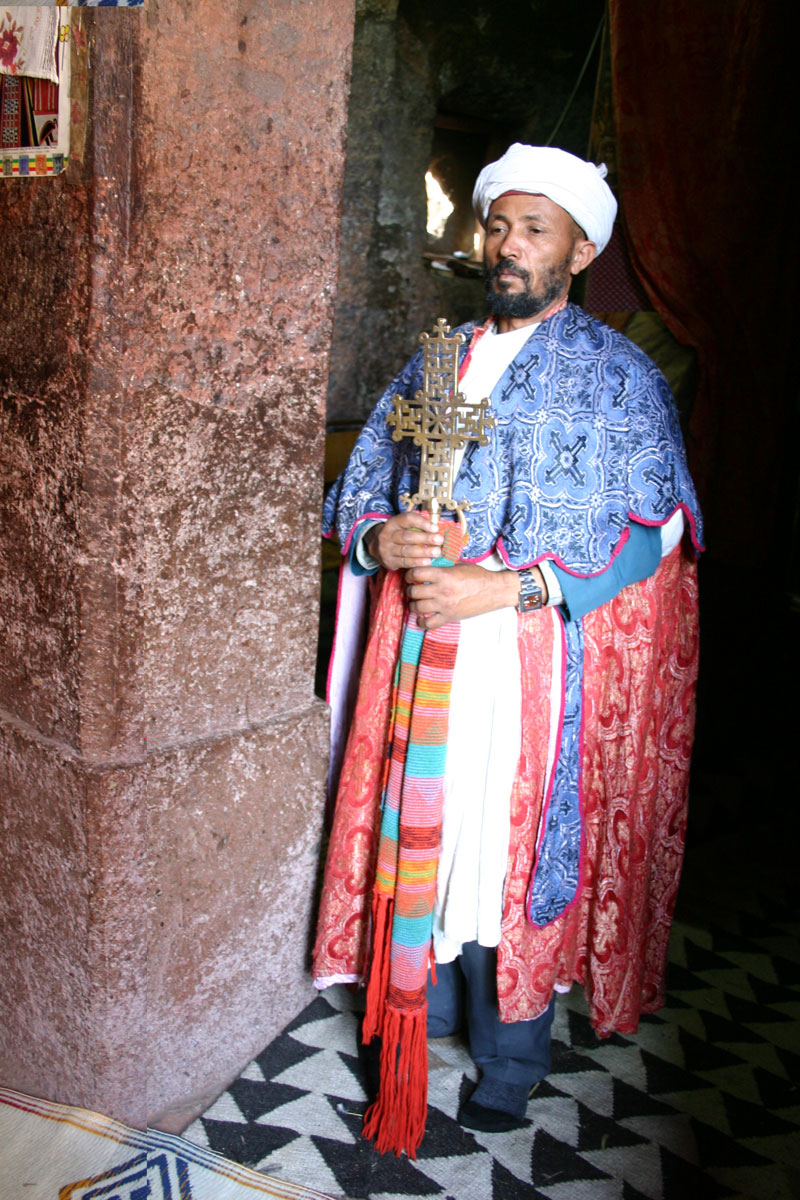 On arrival the priest in charge is sent for, often from his bed and the church is opened for you. Exclusively for you as a private presentation.  You will be invited to give a fixed and generous ‘donation’ (actually the only really expensive thing in Ethiopia) both to see the church and take photos and more for a video. In the darkened interior the treasures will be demonstrated. The Cross of Lalibela, the crown of St George, frescos, carved details of birds and bulls in the rock, musical instruments and much more besides.  Only the inner sanctum, the Holy of Holies is not on view, here  the Ark of the Covenant may reside and no one must know where.  The Ark , legend has it, was given to Menelik I, the son of the Queen of Sheba and Soloman for safe keeping when Jerusalem was under siege.  Menelik brought it to Ethiopia where it has been kept hidden and safe for more than 2000 years.  So one of  Judaisms holiest relics remains guarded and treasured by the Ethiopian Orthodox Church.

At Bet Golgotha there is the tomb of Lalibela himself along with some of the best preserved examples of early Christian art in Ethiopia.  There are no coach loads of day trippers, no clamouring entrepreneurs selling dubious comestibles, no pressure, no time.  Just you and your thoughts and a truly unique experience.

It is not always thus and at Christmas or during the Ethiopian festivals of Timkat and Leddet there is considerably more of a crowd.

There is, I fear, a significant risk of getting ‘Churched out’, even for the most avid devotee of the genre, so it is a good idea to pace yourself.  The country-side around is spectacular without being awesome. The hills have flat tops with steep eroded valleys.  Every inch of the land is cultivated and in May, dry and begging for the rain.  The road up to Lalibela is tarmac of a sort but in all the surrounding hills the transport is by donkey, mule or foot. 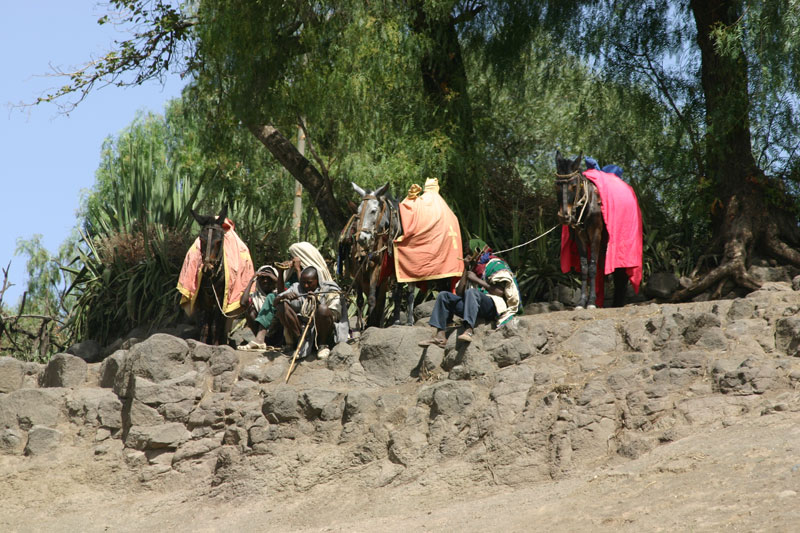 Mules are the preferred mode of transport to explore the countryside

If you catch the weekly market you will find people from miles around thronging at the edge of town.  The wares range from tethered lines of mules flicking at the tormenting flies, salt in great brown-white blocks from the Danakil, garish green plastic sandals from China and piles of pepper that make your eyes and nose stream. There is no bargaining.  That is the price, take it or leave it.  Unless you want a donkey, then in the manner of horse traders the world over you had better be on your mettle.

A visit outside town requires the negotiation of transport.  You can walk to some sights but it is steep and hot and not exactly contributing much to the local economy.  Also there is the risk of accumulating your own entourage of urchins and there is only just so much “where are you from?” and “give me pen” that a traveller can take. 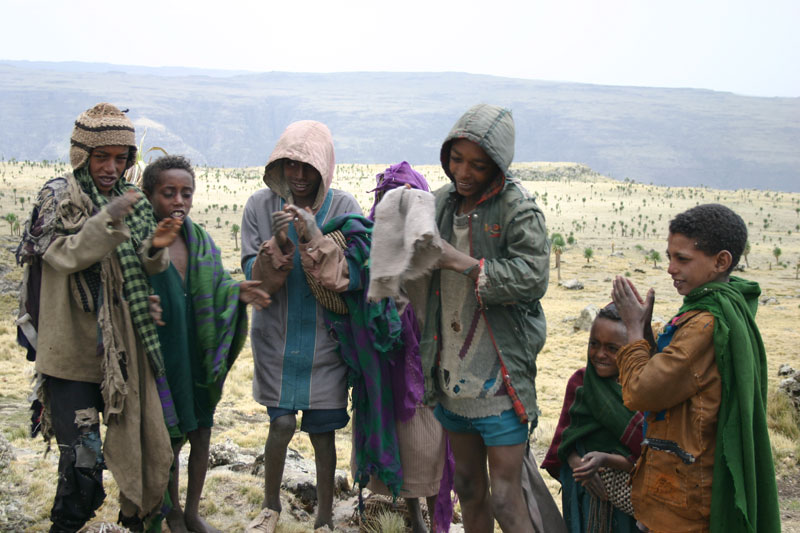 Some of those ‘Urchins’

Once having arranged your transport in perhaps a Rumanian made Fiat look-alike whose exterior and engine bear the marks of considerable history, your driver will ask for money and disappear.  Just as you are cursing your gullibility at having been taken for a ride (not) he will reappear with a bottle of petrol, just sufficient, to the millilitre, for your intended journey.  Detours are not an option.

There are plenty of places to visit near and far, but for a man with only a plastic bottle full of 4 star, Nakuto La’ab is a good start.  Seven kilometres from the town and down hill, ensuring that you at least get there if not back.  This attractive church is about fifteen minutes walk from the road built in a cave on a cliff face under a vast over hang of rock.  It is approached through a grove of olive trees, some of which are 6oft tall and so not the sort of olives that you would recognize from your French summer holiday.  Down some precarious steps to the outer wall to be greeted by the priest in residence who in the cool of the interior will show you beautifully illuminated manuscripts on thick vellum and bound into a great leather bible.  Drums beaten with a curved wooden stick, polished by use and stalagmites created by the constant drip of holy water no matter how dry the season. 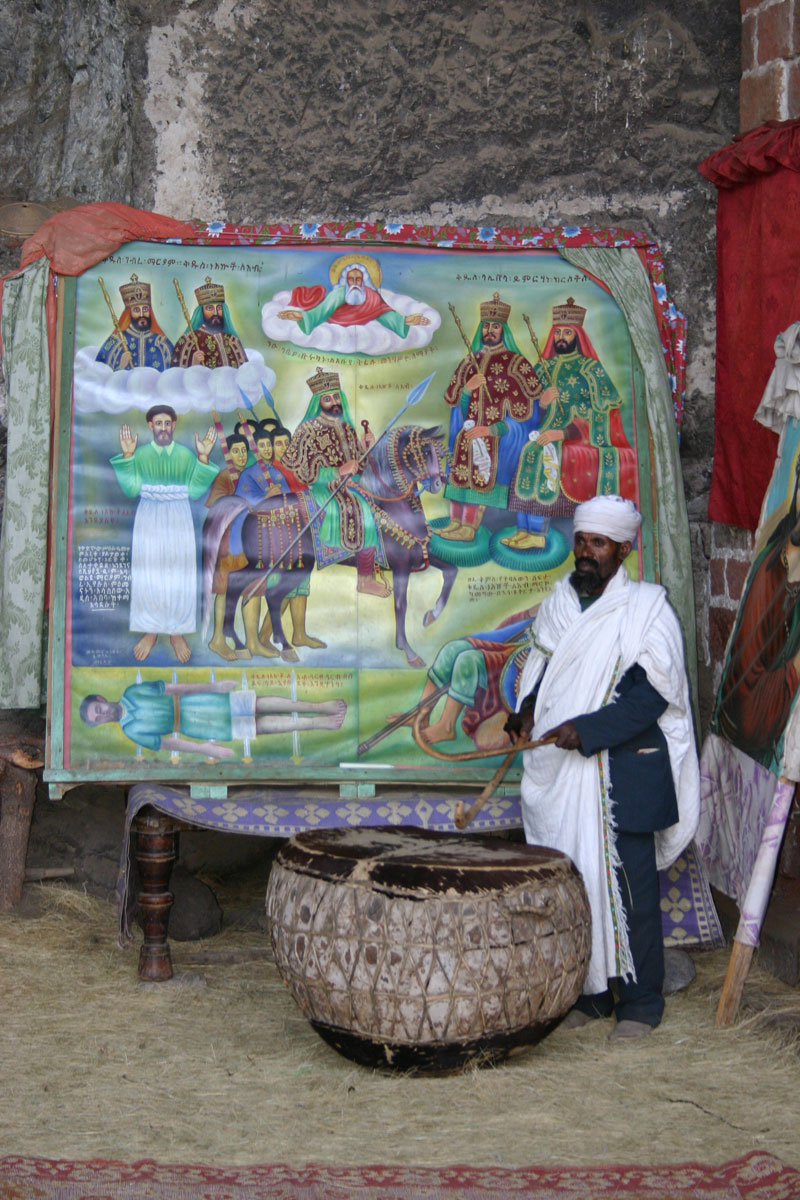 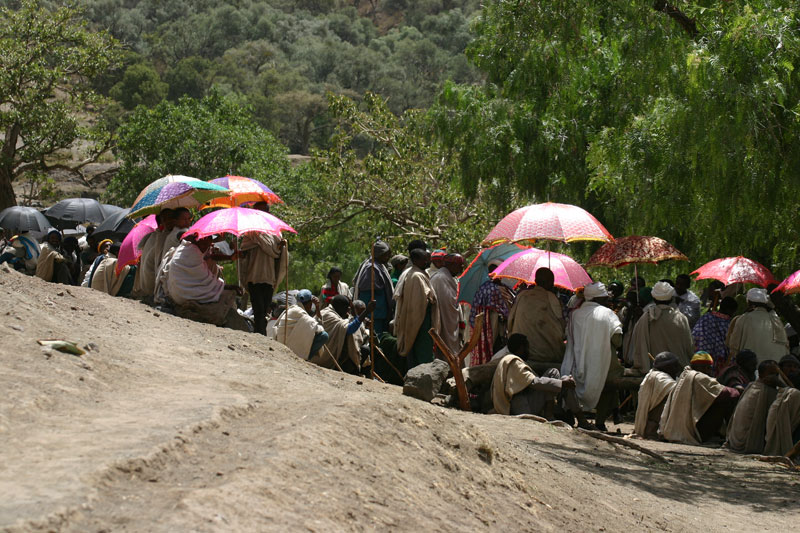 If you travel for comfort or for culinary excellence then perhaps your fingers will not leaf through the guide books to Ethiopia.  If you travel to gain an understanding of the world or perhaps yourself then give it a thought.  It is a country that is so often used to burnish the guilt of our excessive western lives or prise pennies from our pockets in token gestures of goodwill.  Let it be so much more than that.  A proud country of unique experiences and outlook that should grace every thinking persons travel portfolio.  Go on, go there and enjoy it.

More Images of the people and places in this fascinating country 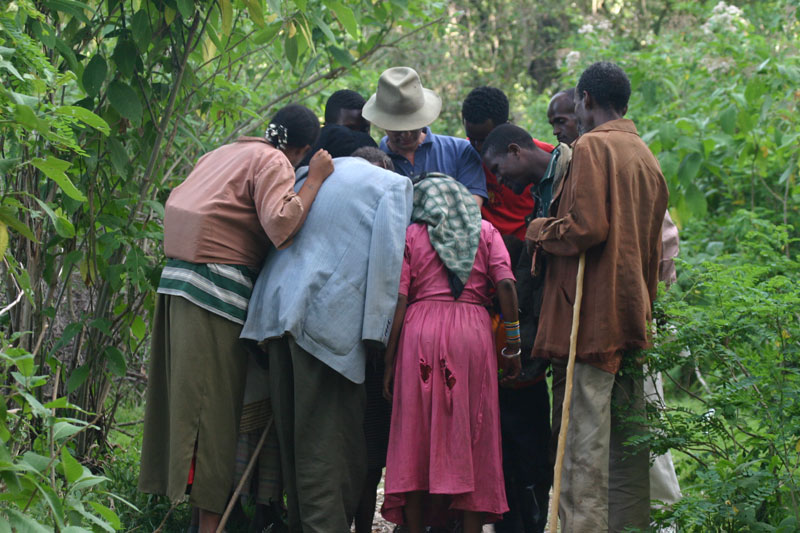 The author sharing a video with some locals 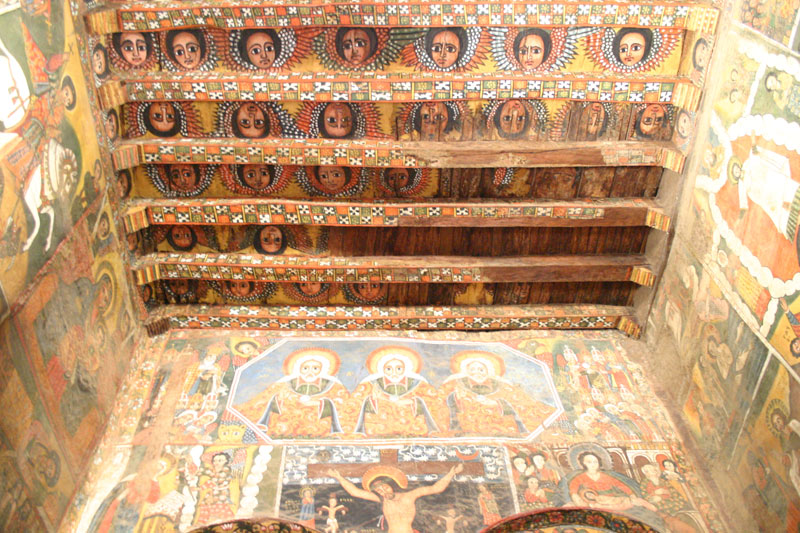 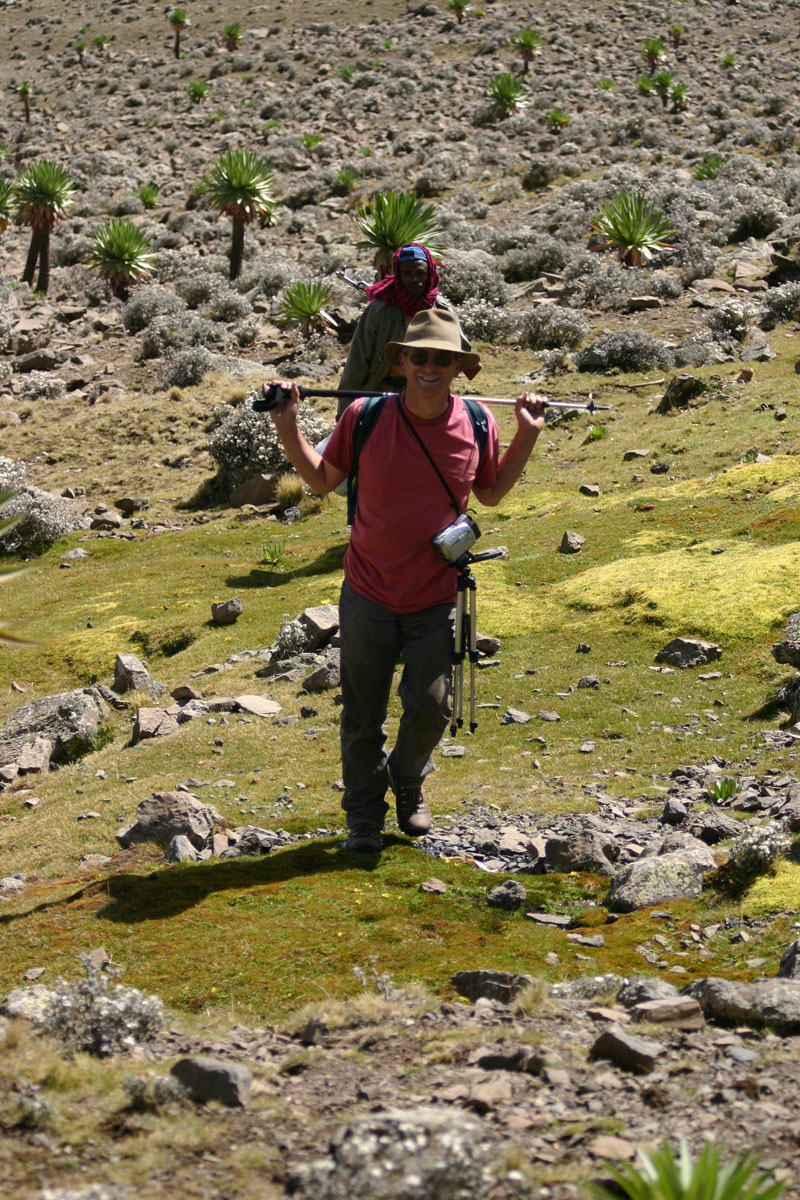