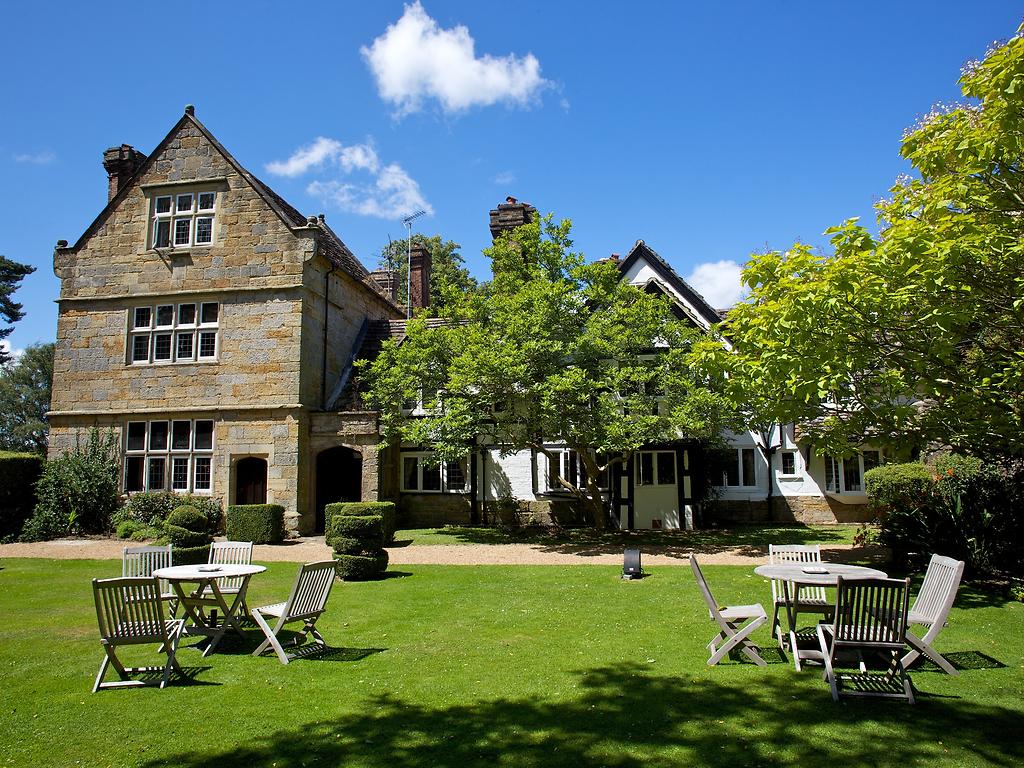 On first sight Ockenden Manor tucked away in the well-heeled commuter town of Cuckfield in Sussex, might appear to be just another traditional Country House Hotel.  It is all these things but it has a delightful surprise in its ultra modern box-like Spa complex that shouldn’t work architecturally, but just does.  It makes a startling contrast to the Elizabethan manor but provides all that one could want in the way of a Spa.

The interior is flooded with light with uninterrupted views to the parkland that gives guests the impression of being part of the outside whilst enjoying the delights within –  the Spa provides an indoor/outdoor pool, hot tub and Jacuzzi, walk through rain shower, steam room, sauna, gym, relaxation area, sundeck, guest lounge and café. 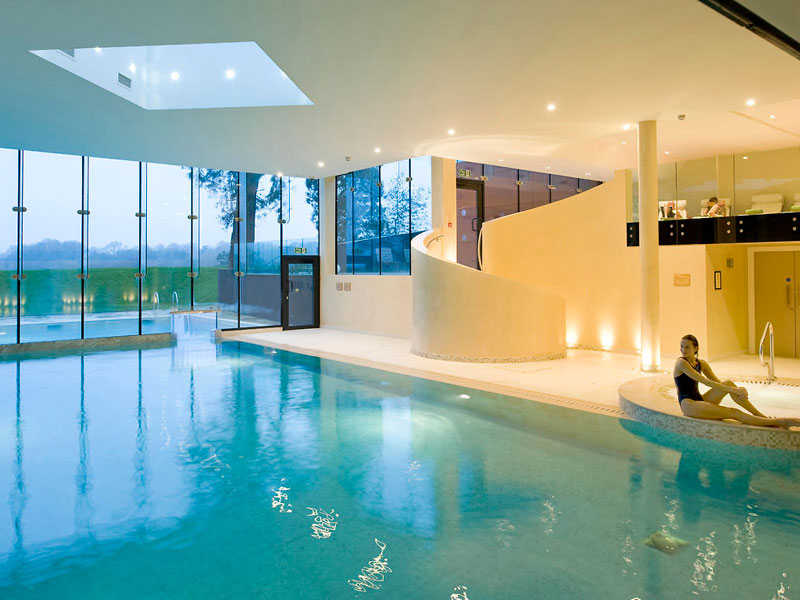 In addition to all this, you can have the option to stay in the Spa in one of their six stylish bedrooms with shutters in the bathrooms open on to bedrooms that in turn open on to a roof garden with superb views over the South Downs. 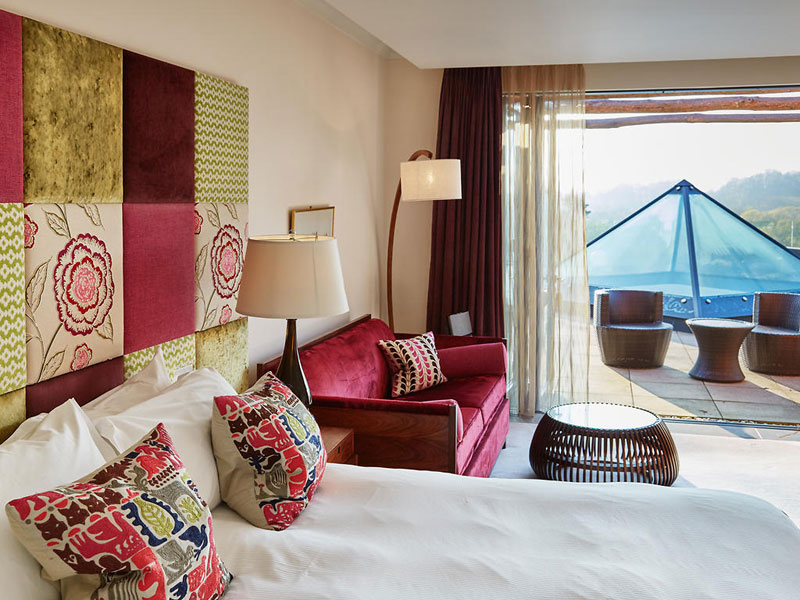 After a day luxuriating in the Spa you can return to the Elizabethan Manor House for some pampering in a more traditional style.  We were staying in one of their Classic Suites, located in the oldest part of the hotel with its own separate sitting room on one level with the bedroom accessed by a short flight of stairs so that the bedroom and its private balcony had views over the beautiful gardens. 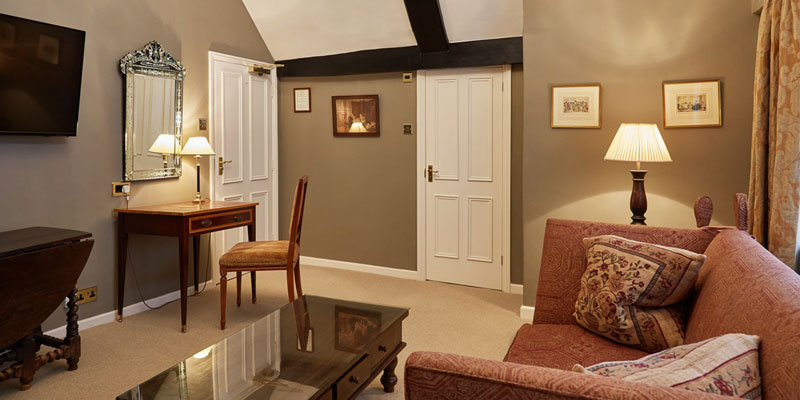 The hotel has twenty eight bedrooms in total, each individually decorated in a unique style with an abundance of charm and are named after members of the two families who have owned Ockenden Manor since 1520. There is something to suit all tastes.

Sitting in the elegant drawing room with glass of champagne in hand, prior to dinner it is always interesting to imagine the previous occupants of the manor.

The manor house dates back to the mid 1500s.  The Michel family lived there for over 100 years until the house burnt down on 8 September 1608.  In 1658, John Burrell who had grown rich on the Sussex iron industry, bought the manor, extending it and adding what is now the oak-panelled Burrell Room. Today, the Burrell Room with its original Tudor ceiling is used for private dining and as a breakfast room.

The property remained in the Burrell family for a long time until the early 20th century and was for a time, in the 1760s, owned by the fourth Duke of Marlborough, whose mother Elizabeth Burrell had married the third Duke.

However, as with many grand houses they are converted to other uses and in the early 1900s Ockenden was home to a Jewish Boys School and at the start of the Second World War it housed Canadian troops.

Thankfully after the war, Mr. and Mrs. Eggars opened it as a restaurant and guest house.  This was the start of Ockenden Manor being restored to its former glories and its final transformation into a stylish Country House Hotel  with all the modern comforts we have come to expect.

Champagne consumed we were led into the traditional, stylish dining room.  After not too much thought we were tempted by the six course tasting menu.  This was intriguingly styled as a ‘Surprise’ menu and one delicious course after another followed.  This was certainly the best way to sample as many of the creative dishes produced by the Head Chef, Stephen Crane, as to chose just  one would prove impossible.  Another recommendation is to allow the sommelier to select a wine to accompany each course which is well worth the £50 per head to have an expert match a wine perfectly to the dish.

There is also the option to chose an eight course tasting menu but we would have had to have starved ourselves all day to do it justice.

Ockenden Manor is one of three hotels in the group and all in West Sussex, the other two being Bailiff Court in Climping and The Spread Eagle in Midhurst.

Ockenden Manor is well placed as a country escape from London as it is only an hour’s drive.  Should you feel the need to escape the hotel and spa, the hotel is perfectly placed for walking the beautiful South Downs and is within easy reach of Brighton to the south.

It is also well positioned for the many Race courses dotted along the South Downs , including Goodwood, Fontwell, and Plumpton, and easy driving to Chichester for the Festival Theatre, and even closer to Hickstead for show jumping.

The Sussex coastline boasts some wonderful beaches, and many little harbours, and ports with numerous Marinas for the sailing enthusiast, and some challenging golf courses. Another attraction is the Polo at Cowdray Park.

We greatly enjoyed our all too brief a visit, and can thoroughly recommend it to anyone wishing to re-charge their batteries, and relax in luxurious surroundings  Far from the Madding Crowd.

Ockenden manor looking impossibly romantic in a covering of snow on a bright winter’s day – no better place to be ‘snowed in’! 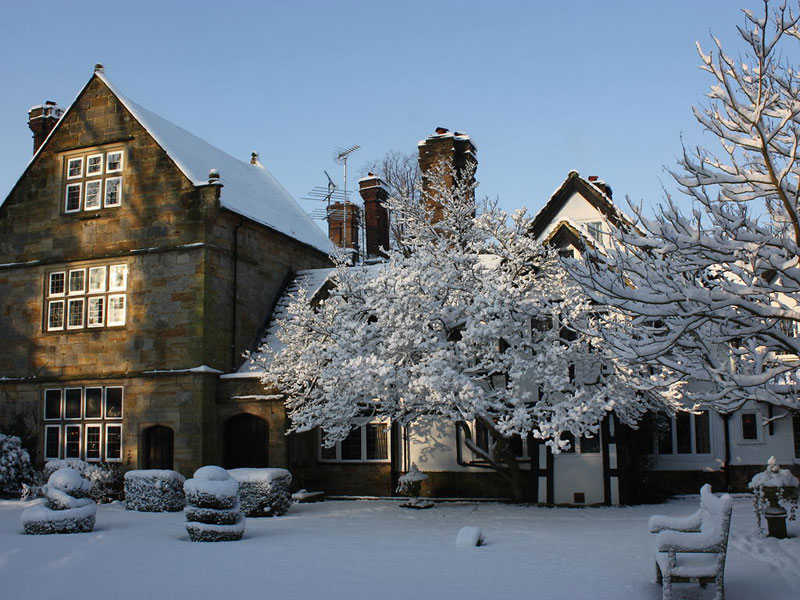 Chrissy Jarman studied at Southampton University where she gained a degree in Fine Art Valuation and worked for 16 years at Gerald Marsh Antique Clocks in Winchester, now known as Carter Marsh.  Following her departure from Carter Marsh she has been instrumental in the launch of The Vintage Magazine and the design of its website.  As well as being a contributing author she is the Features Editor of the magazine with special responsibility for Arts and Culture.