This month saw the arrival of the 108 metre, 5 storey Sunborn London at the Docklands’ Royal Victoria Dock.  A Superyacht by anyone’s standards.  However this Superyacht will offer its facilities to a wider audience because it is to be used as a Hotel location. 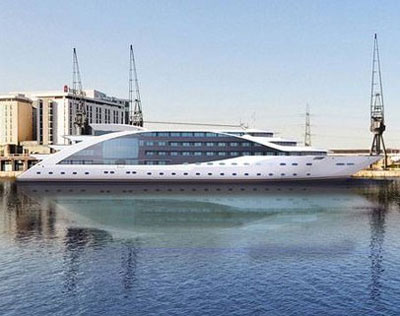 The vessel has been configured to be used as a 4-Star Deluxe yacht hotel incorporating 138 spacious guest rooms over 5 floors including several suites, along with an elegant reception area, bar and lounge, fine-dining restaurant, banqueting facilities, auditorium, conference rooms, and a three-level event venue with outdoor terraces facing towards Canary Wharf and the Siemens Crystal.  Sunborn London is sure to become an important landmark in one of the city’s most affluent commercial areas.

Moored at Royal Victoria Dock, the riverside location is picturesque and convenient for Canary Wharf, Greenwich Market, City Airport and events at the nearby O2 and ExCeL exhibition centres.  Most cabins come with private balconies and separate lounges, the reception boasts a glamorous spiral staircase and there is a spacious restaurant that seats up to 80 people.  With 77 classic, 55 executive, 2 Junior Suites and 2 feature Royal Suites incorporating separate lounge,  terrace, Sauna and sunken  Jacuzzi bath, all the usual luxurious room choices of land based hotels are provided. With Spa, Gymnasium, fine dining terraces and conference facilities adding to the facilities that guests can enjoy.

The Sunborn Group, a Finish based property and leisure group built their first Superyacht Hotel in 1998, locating it at the Naantlai Spa resort in Finland.  The group trialled a yacht hotel at Excel Royal Victoria dock in 2003-2005.  The success of that experiment resulted in the decision to locate a permanently moored Superyacht Hotel in the Docklands.  Hans Niemi, Sunborn Groups Director of European Operations said: “The new hotel in London, currently the world’s most important city, gives us an important platform for the Sunborn brand and business concept.” The group have also built a new £123 million Superyacht Hotel, “Sunborn Gibraltar.”  At 142 metres and seven storeys with 189 rooms and 22 suites, she will be located on the Ocean Village marina complex in Gibraltar and will also open in 2014.  A further Sunborn Superyacht Hotel project is planned for the Port Forum Marina in Barcelona.  Dubai based development group Al Ghurair had also been looking at Canary Wharf as a location for their project “Aquiva” having been granted planning permission in 2002, but the global recession put this project on hold in 2009.

Much is made by the developers in the marketing to potential guests of getting the Superyacht experience for a fraction of the cost of a charter but for me the static nature and the large number of ‘other’ passengers onboard makes that comparison spurious.  More like a cruise ship experience without the cruising. As an alternative Hotel choice to the usual suspects on the waterfront in a major city, fantastic, but as a superyacht experience that remains to be seen.

The Sunborn London will undergo soft opening from April 7, with general opening scheduled for May 9.  Suite pricing has not been confirmed but entry level rooms are indicated at £180 per night.

Further details can be found at SUNBORN LONDON

Stuart McClellan has been a passionate sailor and follower of all things yachting since he was 11 years old, starting out with his father who on retirement purchased a small family cruising yacht in 1971.  Based in Tollesbury on the Essex coast , every time they left the Woodrolfe Marina they would pass a very large rotting hulk buried in the mud used as a houseboat.  Enquiry as to what a J class (he was mistakenly told the hulk was a J Class) was and the provenance and history of the SY Merry Maid  led to many a trip to the library for information and a lifelong passion for the Big Boat Class of the Golden Era of the 1930s was spawned.  Forty two years on the passion for the beautiful classic yacht aesthetic has been joined by an equal passion for ocean going high tech multi-hulls.  Stuart has had the good fortune to sail big multi-hulls in both Europe and Australia.

A city career in Proprietary Derivatives trading at UK merchant bank Schroders and private trading firm Manro Haydan and for the last 15 years as an independent, part funded this sailing passion, but his desired J Class yacht purchase has yet to be made.  Currently he and his family enjoy cruising the beautiful East Coast estuaries on his 1960 Baltic Clinker or Halberg Rassy.

To share this passion he co-founded SailingAction, a specialist charter organiser for participation and viewing of iconic regatta action particularly J Class, Classic, Thames Barge and working sail and multi-hulls in the UK and Europe.  Uniquely offering bunk and day ticket rather than whole boat charter, offering luxurious champagne days SailingAction has many satisfied customers who have experienced the beauty, majesty and awesome sights out on the water that regatta action brings.