If you say “Uganda” to most people, first Idi Amin and then Gorillas comes to mind.

There is more to the Pearl of Africa than this.  Relegate Idi to tragic history.  He has left a scar but one that has largely healed beneath the emollient touch of a more benign government.

Gorillas are the undoubted gem of the tourist circuit in central Africa; whether you fly in on a no-bucks-withheld safari, ticking off the big five, in one must-do, whistle-stop tour or whether you travel under your own steam in a hire car or local bus.  All who have trekked through the forests that cloak the enigmatic, snow-capped mountains on the equator and seen the gorillas are awestruck.  The close proximity of these great apes, the obvious power, the hint of humanity the sheer rarity of the encounter, moves the soul.  People love it and take home a souvenir that will remain long after the photos have faded.

See the gorillas by all means but leave time for more.  Uganda was a colonial creation.  A protectorate incorporating five kingdoms formed its heartland with some haphazard territorial expansion on the periphery.  Now it is a multi party democracy, its emergence from the dark years of Amin and Obote piloted by its long standing president, Yoweri Museveni.  A man widely seen as one of Africa’s most able politicians.  There is also the advantage that the climate is cool as a consequence of its altitude, its people friendly, they drive on the left and speak English.

If you are adventurous or timid, want to rough it or travel in the lap of luxury, hearty or recumbent, Uganda has it all. Travel is safe and the main roads are mostly good, black topped pipelines built by the Chinese to siphon riches from the heart of Africa.

A circuit around the south-west corner is a good one for the beginner.  This could take in the chimpanzee forest at Kibale , the Crater Lakes, Queen Elizabeth National Park and Lake Mburo in a ten day trip. 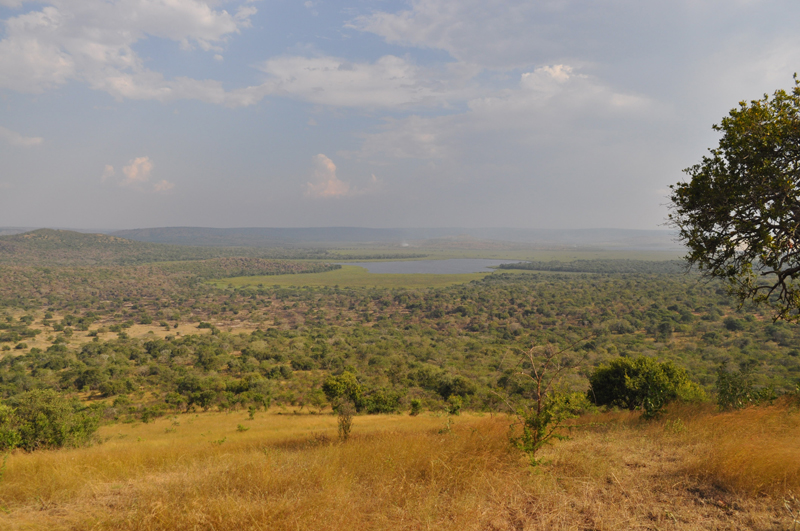 Lake Victoria too has its charms with islands and forest fringed bays beckoning the birdwatcher or fisherman.  Extend further south to the romantically named Bwindi Impenetrable Forest or Mgahinga if gorillas are a must on your agenda but leave enough time to savour the moment.

Chimpanzees are usually shy of humans.  They live in large family groups and are wary of their long-term foe. 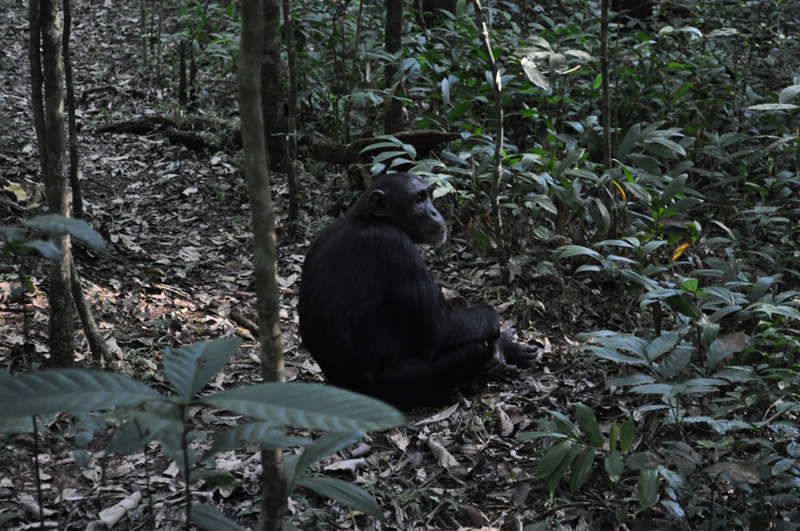 In Kibale, an area of dense forest to the south and east of Fort Portal, some groups have been slowly and carefully habituated to man.  Here The Uganda Wildlife Authority will supply you with a permit and a guide to venture into the forest in search of the elusive ape.  They know where they are, chimps camp in nests they make each evening, so you are unlikely to be disappointed.  There will be other travellers but so careful has been the habituation that the apes are unconcerned by the camera clicking attention.  They get on with their own business while you look on.  Behind your lens you can quietly imagine you are Attenborough or Goodall as you watch the dominant male guard his family or a grooming pair quietly rummaging for edible passengers in their hair.  Who is studying who I wonder?   Early morning is best as the troop forages in the cool before retiring to the tree-tops for siesta. 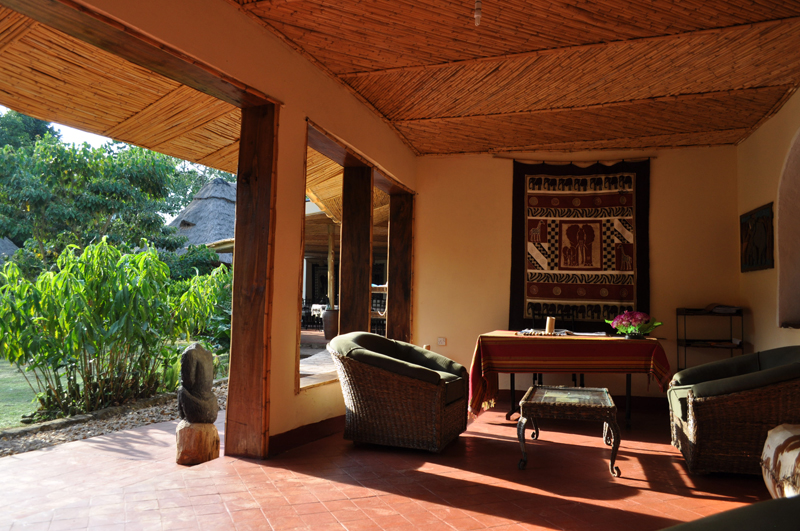 Accommodation was good at the Primate Lodge, which also had the additional attraction of being 200 yards from the hub of the National Park from whence ‘Chimp Tracking’, as it is called, starts.  No pre-dawn starts for these residents, just an amble down the slope after a leisurely breakfast and a good sleep.  The lodge is in deep forest so there is no view but plenty of wildlife in the jungle around to keep you amused when not chasing chimps.

Queen Elizabeth National Park, the jewel of Ugandan game parks lies south of  the Rwenzori and on the shores of Lake Edward and Lake George (how British royalty have been honoured). 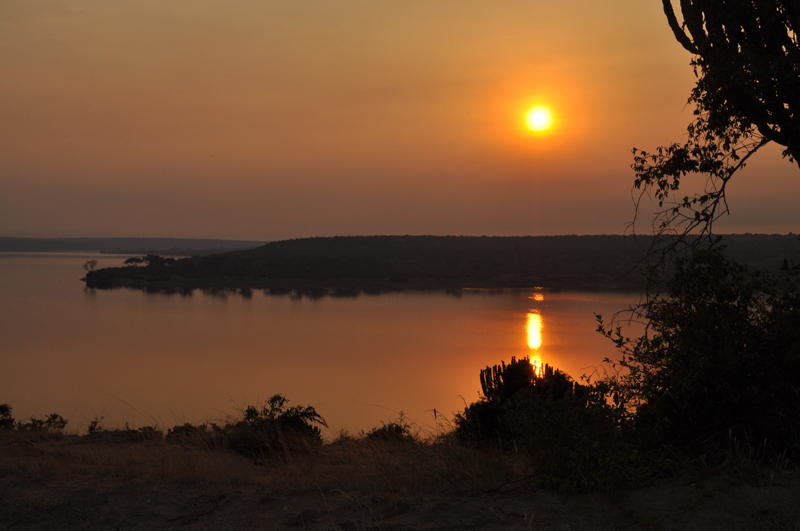 Dawn over Kazinga Channel in the Queen Elizabeth National Park

The central spot, on the Kazinga channel, between the two lakes, is Mweya.  Here a fine lodge stands on a hill over looking a peninsular. Commanding aspect, excellent views and magnificently placed. 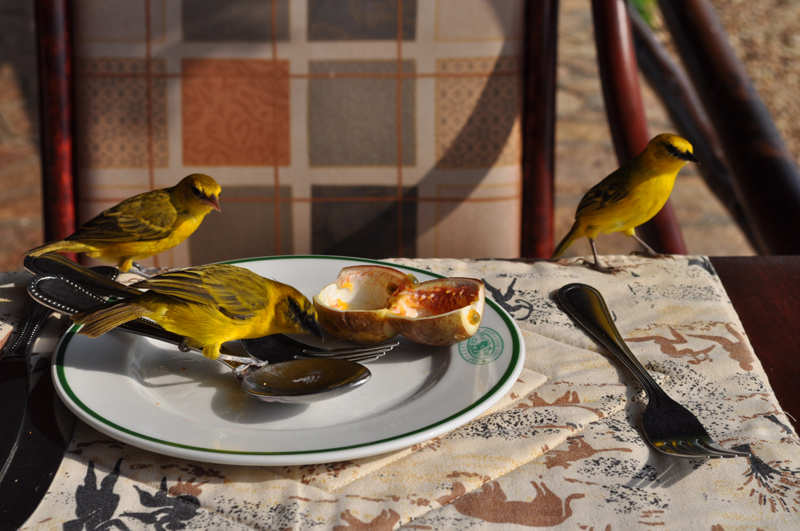 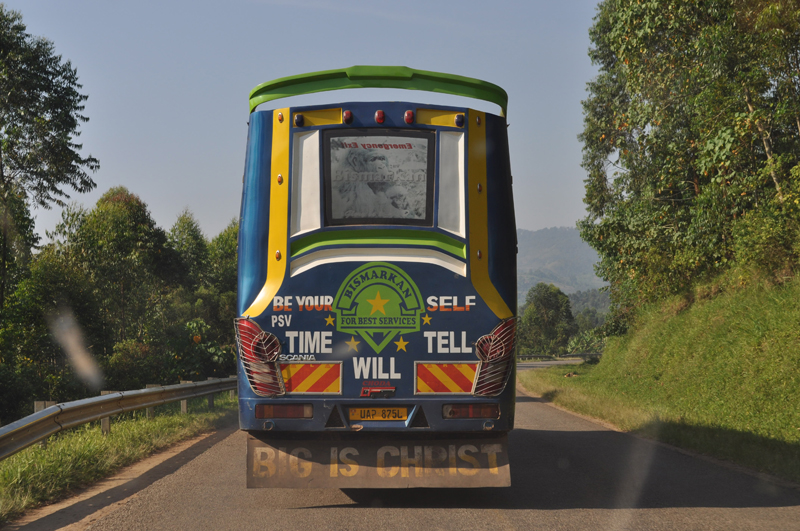 Buses filled with breathless tourists sweep through the gates, their bewildered cargos ushered to Safari Toyotas in a rushed tick box itinerary.  This need not trouble the independent traveller who can enjoy the red-faced bewilderment of freshly jet lagged folk before sauntering to the bar or pool as the fancy takes you.  The discomfiture of your fellow man need not trouble you as your languid gaze takes in the lake and savannah that stretches up to the mountain snows, spotting lounging hippos or foraging elephants in the process. 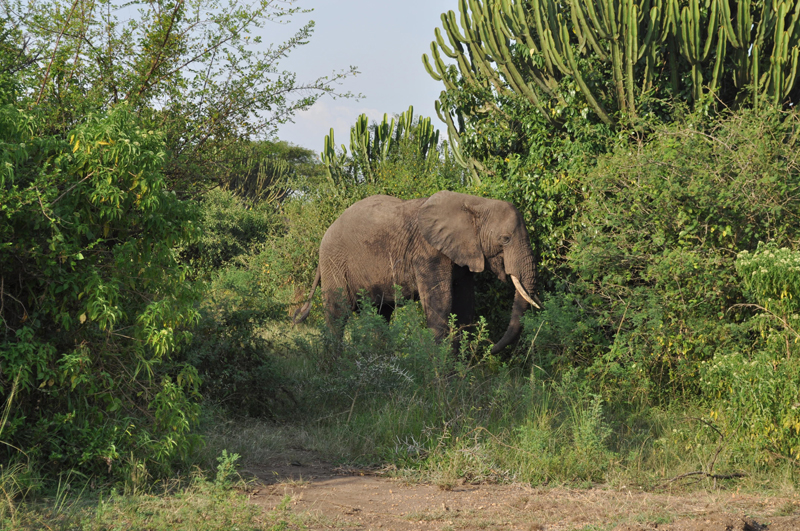 From Mweya you can explore the savannah of the plain, the volcanic foothills of the Rwenzori or the lake shore all the way down to the famous tree climbing lions at Ishasha on the Congolese border.  There is bush dominated by giant euphorbia, mountain grassland and dense forest.  Empty apart from elephant, kob, buffalo and a host of other fauna.  You can explore it all and enjoy getting lost in Africa.

Heading south and east, through the capital of the Ankole kingdom at Mbarara you traverse hilly country and endless banana plantations. 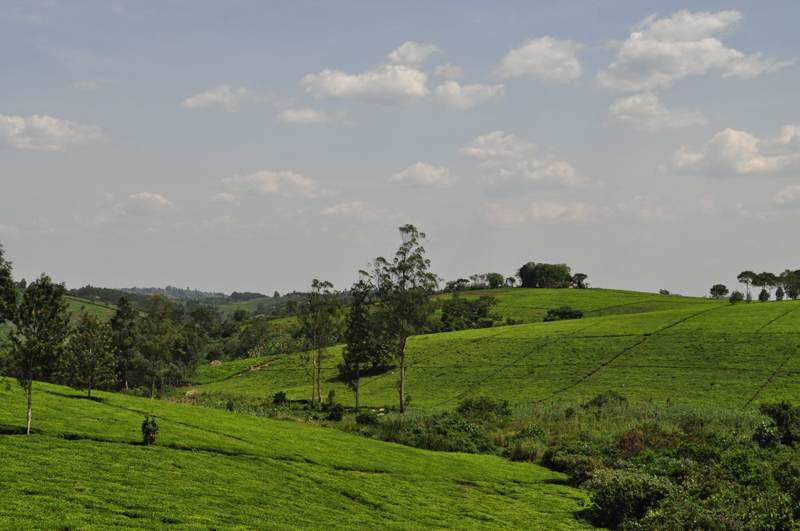 Tea too, clipped like a  Japanese garden into a sea of bright green pillows.  It is said that, per head, Ugandans eat more bananas than any one else in the world.  You can see why. Bananas stretch to the horizon.  Men on bicycles ferry them to market.  No donkey or bullock carts, no pickups or even hand-carts here, all by bike.

East of Mbarara the land dries and cattle dominate.  At Lake Mburo, bush, thorn scrub and more euphorbia.  This is Tsetse fly country and the cattle scarcer.  In the 50s it was the scene of the most flawed experiment imaginable in the control of animal disease.  A project to eradicate Tsetse fly was determined upon.  To do this it was proposed to kill the entire animal reservoir, arguing that with no animals to feed on the fly would die out.  Duly all the animals were shot.  The fly did not disappear so the plan B was to destroy all the vegetation and deny habitat.  The bush was burnt flat.  Again an own goal and the Tsetse thrived. Thankfully they gave up and the bush with its wild life recovered and evolved into Lake Mburo National Park. 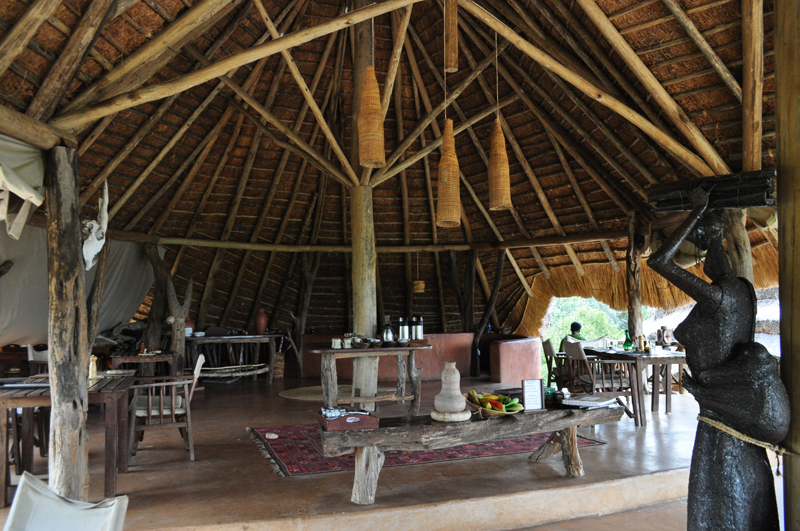 On the border of this wilderness, high on a rocky bluff is found a perfect retreat. Secluded, cool in the breeze with views across  Lake Kachera to the east and rolling hills to the west, its private cottages nestled in the contours of the hill, Mihingo Lodge plies its trade.

Designed by a Ugandaphile with artistic flair and run by a young couple who tread softly in the bush, it conjures a unique environment.  Good food and wine, a view down over a game filled waterhole as you dine give it points. Add the crowning glory of African adventure, the ability to ride out in the bush and you have Hemmingway heaven. 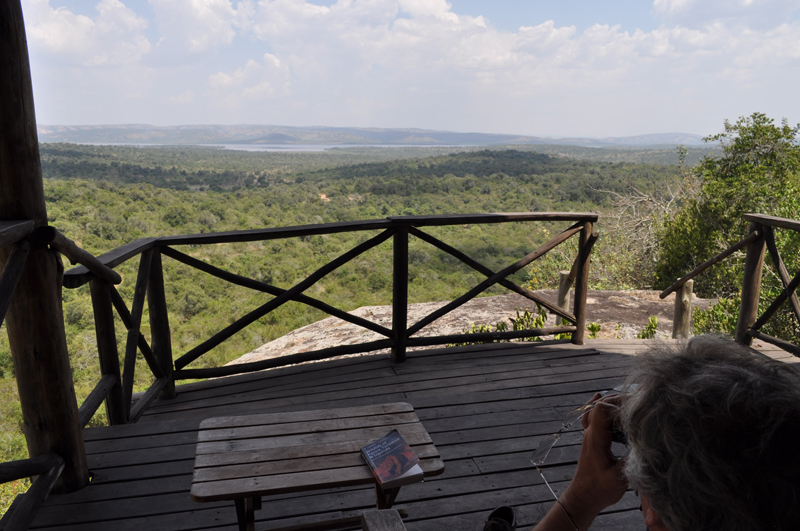 An early morning ride, while the wildlife is breakfasting, caps all four-wheel safaris. On horseback, you become part of the environment.  You ride through the zebra herds grazing on the plain or brush past Uganda Kob nibbling the young grass . Topi ignore you and Wart Hogs wait until the very last minute before hoisting their radio aerial tails and trotting off a few yards to consider.  This is not imagining Africa but living it.  The sights, the smells, the open air, the ether of the bush.  I believe only in Mihingo can Uganda provide this and it is a treat not to be missed. 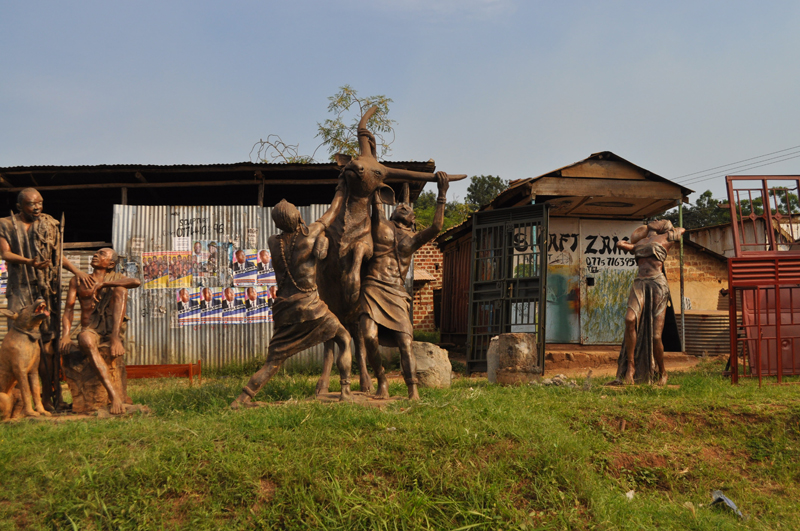 Roadside Art on the road to Kampala

The drive back to Kampala takes about five hours.  Round off your holiday with a pause on Lake Victoria.  Twenty odd miles across the water from Kampala and about the same from Entebbe, the site of the airport, is Bulago Island.  Two miles long and a half-mile wide this emerald islet, forest fringed and grass topped acts as escape for those of Kampala society who are lucky enough to have one of the few houses that nestle in the jungle shoreline.  For the birdwatcher there is more avian life than can be dreamed of, enough to fill an entire holiday on its own for an enthusiast.  There is also a small hotel. 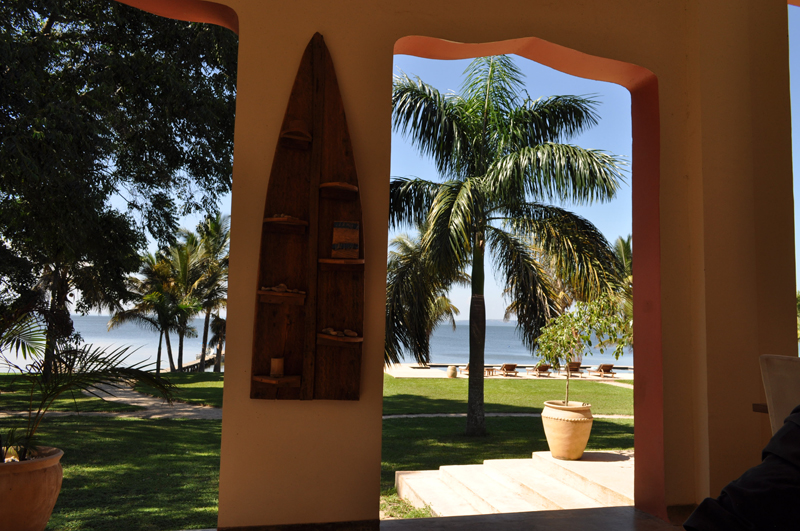 Paradise Lodge (alas a cliché of a name but in this case apt) terracotta hued and built in the Arabian coastal style, sits on its own bay.  It drowses, under rustling palms and awaits your arrival by boat or light aircraft to cosset your travel weary limbs and allow you a last languid moment before the return home. Run by a rugged émigré from Zimbabwe, it is close to the final point of departure from Uganda.  Entirely secluded on its car free island, Paradise Lodge provides the most perfect last stop in this pearl of a holiday.

We never saw the gorillas but the chimps come a close second.  Put Uganda on your list you wont regret it.

Dr. Bruce Dunlop, a GP in Chichester, intrepid traveller and sailor, writes about his peregrinations for The Vintage Magazine